Hitting screens: film portrait of an artist and critic 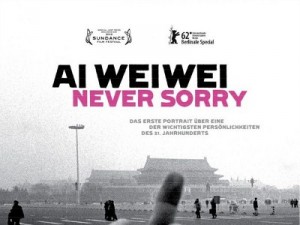 Right in time Ai Weiwei´s house arrest is being lifted: The documentation Ai Weiwei: Never sorry hits screens these days. For three years the producer Alison Klayman shadowed his life, resuming in an film portrait of one of the most compelling public figures in China. Now everybody gets the chance to gaze at the life of the known conceptual artist.

The film isn’t a media unknown to the artist: Ai Weiwei uses social media and finds a great platform for political activism in the Internet. Artist and regime critic, Ai Weiwei unites these positions. Trough art he communicates and expresses himself, creatively and radically he deals with his China. In his political-artistic driven activism the dissident tries to make grievance obvious and fight injustice. He aims at a world, free of human rights abuse.

Ai Weiwei works with pictures and let’s them talk. The outcome is volitional, but due to his behavor the artist and his family are affected by reprisals on a regular basis. Last year he was detained for a few months and has spendt his days since in house arrest in Peking.

Last year a panel discussion on Ai Weiwei’s role in art and activism was held at Leuphana University Lüneburg, Germany (co-organized by Cultura21 and the FIDH).