This september, a 30-foot carbon bomb blew up in the airspace over the Hudson River in front of West Point Military Academy. 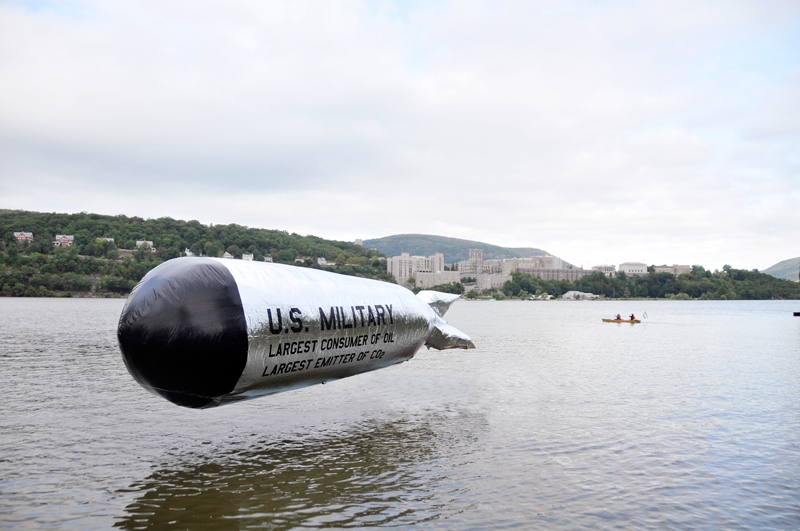 An inflatable bomb pressurized with carbon dioxide, hydrogen, and oxygen contained in outer shell of silver radiant barrier foil, the carbon bomb was manufactured as part of a research program coordinated by the inflatable fabrication group Tools for Action. Lettering on the side of the bomb read, “US Military: Largest consumer of oil, largest emitter of CO2.”

The carbon bomb was transported down the river by a flotilla of canoes midway through a two-week journey traversing the Hudson River down to New York for the upcoming climate mobilization. At West Point, the Sea Change Flotilla was joined by former military service members from Veterans For Peace, who plan to carry the carbon bomb in the Stop the Wars, Stop the Warming contingent at the Peoples Climate March on September 21.

“The primary culprit in all this heating the planet is not you or I because we don’t recycle quite enough. It is the US military, the biggest user of fossil fuels and the largest emitter of CO2 on the planet – not to mention its ongoing wars waged for resources and power – wars of destruction to people, life and the environment,” said US Army veteran Tarak Kauff.

As the United Nations prepares to meet in New York on September 23 to discuss climate change, one subject that will not be on the negotiating table is the emissions of the US military. Although the US military is assumed to be the largest emitter of CO2, the military is not required to report their emissions to the UN. While the Pentagon refuses to release fuel usage data, it has been estimated that the US military is responsible for five percent of total global greenhouse emissions.

“In the dialogue around stopping climate change, too much emphasis is being put on ethical consumerism,” said Katherine Ball of Tools for Action. “Does it really matter if we try to fly less if the US Air Force continues to burn one-fourth of the world’s jet fuel? We have to address the systemic causes of climate change: the most eco-friendly thing you can do is be anti-war.”

For decades, the US military has been fighting wars to secure oil resources. These wars have taken many forms: from the CIA-planned coup in Iran in 1953 in order to prevent the newly elected prime minister from nationalizing the nation’s oil, to the full-scale invasion of Iraq in 2003 in order to – among other things – up the production of Iraq’s vast oil fields.

In the process of fighting these oil wars, the US Department of Defense has consumed more energy and emitted more carbon than any other institution on Earth. In 2003, as the military prepared for the Iraq invasion, the Army estimated it would consume more gasoline in only three weeks than the Allied Forces used during the entirety of World War II. The Guardian estimates that throughout the entire Iraq War, the US military’s carbon footprint was between 250-600 million tons.

“Military interventions for oil are just the tip of the iceberg. The military is gearing up to fight ‘climate wars’ over resources destabilized by climate change: water, arable land, food. It is a vicious cycle: In fighting these climate wars, the military will release emissions, which will cause more climate change, which further destabilize resources and cause more climate wars, which will cause more emissions…” Artúr van Balen of Tools for Action said.

The US military itself has long warned of the reality of climate wars, “The projected impacts of climate change will be more than threat multipliers; they will serve as catalysts for instability and conflict,” explains the US Military Advisory Board Report National Security and the Accelerating Risks of Climate Change.

“We are actively integrating climate considerations across the full spectrum of our activities to ensure a ready and resilient force,” John Conger, the Pentagon’s Deputy under Secretary of Defense for Installations and Environment, said in a statement following the 2014 report. Global weapons manufacturers are also planning for these climate wars, predicting that there will be increased demand for their products as climate change accelerates.

Katherine Ball concluded: “Is military force the US government’s plan for dealing with climate change?”

Lena is the Treasurer of Cultura21 Germany. She is studying Cultural Sciences (Mag. Art.) at Leuphana University Lüneburg, Germany.

View all of Lena Felde's posts.