Since April 3rd 2011, world-renowned contemporary artist and activist Ai Weiwei is detained by the police in China, sparking worldwide protests from governments, human rights groups and art insti-tutions, among others, calling for his release. How far can artists contribute to social transformations towards sustainability in contemporary China? On June 16th 2011, a special evening is being organized at Leuphana University Lüneburg (Germany), asking this and other questions, around the case of Ai Weiwei and addressing the contemporary human rights situation in China, as well as the roles of artists engaged in questions of social transformations and sustainability. An 18-minute segment produced by filmmaker Alison Klayman will be shown as part of the event, followed by a panel debate with the exhibition organizer Roger M. Buergel, international human rights activist David Knaute and conceptual artist Anke Haarmann.

The panel will be moderated by political scientist Ursula Scheid as well as Volker Kirchberg, who is the professor for cultural distribution and cultural organization at Leuphana University. The film will be preceded by a press conference by the International Federation for Human Rights (FIDH) and by a lecture on artistic initiatives for ecology and sustainability in contemporary China. 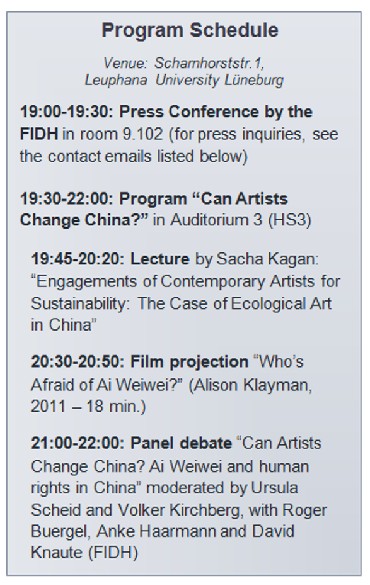 About the participating speakers:

Roger M. Buergel studied art, philosophy and economics. He is an exhibition organizer and author. In the years 1997 to 2004 he realized several exhibitions together with Ruth Noack, among them „The Government“ at the Kunstraum of the University of Lüneburg. He was director of documenta 12 in Kassel (2007), a show for which he had invited Ai Weiwei. In the last years he has been teaching at the art school of Karlsruhe. 2010 he curated an exhibitions with works by Ai Weiwei in the new DKM museum in Duisburg. He is known to be one of the persons with the highest familiarity with the artistic work of Ai Weiwei.

Anke Haarmann is a conceptual artist, curator, PhD in Philosophy and PostDoc at the ICRA/ IKKK, Leuphana University Lüneburg. Since 2004 she visited China and Japan many times for theoretical and artistic research. Her work focused recently on public urban space, art interventions and art in the public interest. In 2008 and 2010 she realized two exhibition platforms on Shanghai in collaboration with Chinese and German artists. The 2010 platform in Shanghai had to be canceled due to pressure by local authorities, and turned to the public space as its venue.

David Knaute is the Asia Director for the International Federation for Human Rights (FIDH). As such, he works closely with FIDH member organization in China, Human Rights in China (HRIC), which operates in exile from New-York City. David has previous human rights work experiences in conflict-affected countries in Asia.

Ursula Scheid studied Political Sciences with a focus on China at the LMU Munich, attended the German School of Journalism (DJS) and worked as a free writer. In 2003, she further studied at the Munich Film School (University of Television and Film). Her first documentary is an essay about the new bourgeoisie in China. While she was living in Beijing for four years, she got to know Ai Weiwei and accompanied him in his documentation project Fairytale.

Volker Kirchberg: Director of the ICRA/ IKKK, Volker Kirchberg is University Professor for Cultural Distribution and Cultural Organization in Applied Cultural Sciences at Leuphana University Lüneburg. He is the author of numerous publications on culture and urban sociology at the interface of market, state and the non-profit sector. His current research includes studies of museum visitors (e.g. “eMotion” project), cultural consumption, and multiple relations between creativity and urban development.

At 19:45 Sacha Kagan will give an introductory lecture about the engagements of contemporary artists for sustainability in China. He is Research Associate at the ICRA/ IKKK, Leuphana University Lüneburg and founder of the International level of Cultura21 – Network for Cultures of Sustaina-bility, as well as the International Summer School of Arts and Sciences for Sustainability in Social Transformation (ASSiST). The focus of his research and cultural work lies in the trans-disciplinary field of arts and (un-)sustainability. His work in past years involved several Asian-European cultural exchanges, including a conference in Beijing in 2008 organized by the Asia Europe Foundation.

The 18 minutes film we will project on June 16th at 20:30 is a preview of an upcoming feature-length documentary film About Ai Weiwei by Alison Klayman. From 2008 to 2010, Beijing-based journalist and filmmaker Alison Klayman gained unprecedented access to Ai Weiwei. Klayman documented Ai’s artistic process in preparation for major museum exhibitions, his intimate ex-changes with family members and his increasingly public clashes with the Chinese government. Klayman’s detailed portrait of the artist provides a nuanced exploration of contemporary China and one of its most compelling public figures.The film’s website is: www.aiweiweifilm.org/en.

About the partnership with the FIDH: The International Federation for Human Rights (FIDH) will be present at the event. Apart from David Knaute (see above), the Permanent Representative to the Association of Southeast Asian Nations (ASEAN) for the International Federation for Human Rights (FIDH), based in Bangkok, Thailand, will be attending. Shiwei Ye works closely and coordinates action with FIDH’s member or-ganizations in Southeast Asia. Shiwei has prior experience working on China-related projects for US-based human rights organizations.

This event is organized by Cultura21 and by several departments of the Leuphana University Lu-eneburg, i.e. the students cinema association (Unikino), the Institute of Cultural Theory, Research, and the Arts (IKKK) and the Kunstraum, in partnership with the International Federation for Human Rights (FIDH).

Cultura21 – “cultural fieldworks for sustainability,” is a transversal, translocal network gathering artists, cultural practitioners and aca-demics engaged for the promotion of ‘cultures of sustainability’ in the sense of a sustainable, social ecological change process. It is constituted of an international network and of several Cultura21 organizations around the world. In Germany, where Cultura21 first emerged in 2005, the organization ‘Cultura21 Institut eV’ supports the German-speaking Cultura21 network. Website: www.cultura21.net.

The Leuphana University Lüneburg is a German University committed to humanistic values of liberal arts and sciences as basic principles for self-determined lives, successful careers, and social responsibility in a changing global society. “A university for civil society in the 21st century,” Leuphana introduced a university model which is unique within the German academic landscape. Website: www.leuphana.de.

FIDH is an international NGO defending all civil, political, economic, social and cultural rights, set out in the Universal Declaration of Hu-man Rights. It is also a federalist movement that acts through and for its national member and partner organizations. By remaining in per-manent interaction with local civil societies, it can rapidly identify local obstacles to the work of defenders and take the necessary steps to mobilise support for them. Website: www.fidh.org.

Unikino is Leuphana University Lüneburg’s students association for cinema. This honorary, self-organized group of students often coop-erates with seminars, courses and other groups of interest who are in need of movies to complete their aspired informational goal. During a normal semester they regularly show movies on Mondays.

The Kunstraum of Leuphana University Lüneburg is a contemporary art institution. Its exhibition program is based on collaborations of art-ists, curators and scholars of the humanities as well as the social sci-ences, including their students. Website: www.uni-lueneburg.de/interarchiv/projekte.html.

The Institute of Cultural Theory, Research, and the Arts (ICRA – IKKK in German language) pursues theoretical and empirical research on culture and the arts, the scientific and cultural transfer from academia to praxis as well as teaching from perspectives based in the humani-ties, social and economic sciences. The Institute is organized in the following units: Philosophy, Sociology of the Arts, Cultural Marketing and Communication, Literary Studies, Cultural History. Website: www.leuphana.de/ikkk.