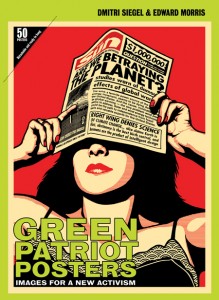 Images for a New Activism

Featuring 50 of the best contemporary posters on the theme of sustainability by artists and designers such as Shepard Fairey, Vier5, DJ Spooky, James Victore and Geoff McFetridge. (Detachable and ready to hang!)
To download a pdf of the book, click here

Produced Sustainably in the U.S.A.

This book brings together the strongest contemporary graphic design currently promoting sustainability and the fight against climate change. Collectively, essays by Michael Bierut, Steven Heller, Edward Morris and Dmitri Siegel look back in time to posters and ideas that set the stage for the current movement (World War Two posters, images of international cooperation, posters from the environmental movement in the 1960s and 1970s) and address the state of the poster: what is the efficacy and mode of distribution for purposeful, message-oriented graphic images today? Thomas L. Friedman advocates for “a redefined, broader and more muscular green ideology that can be the basis of a new unifying political movement for the twenty-first century.” The bulk of the book is given over to a compilation of the best posters on the theme of sustainability by a variety of contemporary artists (both emerging and established), among them Shepard Fairey, Vier5, DJ Spooky, James Victore and Geoff McFetridge. These posters, which have a strong graphic presence and which never rest on the tired slogans of the past (“Save the Earth,” etc.), show that graphic design does not passively respond to the zeitgeist–it helps shape it. The book, which is sustainably printed in the U.S., reproduces 50 of these posters as tear-outs. Also included is a section on action, with documentation of designs at work in the world: on buses, billboards, protesters’ placards, graffiti, t-shirts and so on. This movement is about a new form of patriotism, one that exhibits pride of place, but not fear of others.
Every effort was made to produce this book in the most sustainable way possible. The trim size and page count were chosen to minimize waste; the book was printed using 100% wind power on paper made from 100% post-consumer waste fiber; and it was printed in the U.S.A. to reduce fuel consumption in shipping. Just the paper alone saved:

Edward Morris is an artist, consultant, and sustainability advocate. In 2006 he co-founded The Canary Project, an organization that produces art and media that deepen public understanding of climate change. He is also a principal of Lynx Insights & Investigations, an investigations and consulting company that specializes in work for nonprofits, lawyers, and investors. In 2008 Morris was awarded a Loeb Fellowship from the Harvard Graduate School of Design. He currently teaches in the TransMedia department at Syracuse University.
Dmitri Siegel is a contributor to Design Observer and his writing has also been featured in Adbusters, Creative Review, Design Issue, Dot Dot Dot, Émigré and Utne Reader. Siegel has lectured at the Art Center College of Design, Rhode Island School of Design, and University of Southern California, among other institutions, and is currently a thesis advisor in the RISD graduate program in graphic design. Siegel is the executive director of marketing at Urban Outfitters.
The Canary Project creates art and media that deepen public understanding of climate change and energize commitment to solutions. In addition to Green Patriot Posters, The Canary Project has produced more than a dozen works involving more than thirty artists, designers, writers, scientists, and other collaborators. The work of The Canary Project has been exhibited internationally in both art and science museums, as well as in such diverse venues as billboards, the sides of buses, city halls, the internet, and city streets.
Environmental Defense Fund is a leading national nonprofit organization representing more than 700,000 members. Since 1967 it has linked science, economics, and law to create innovative, equitable, and cost-effective solutions to society’s most urgent environmental problems.
Special thanks to Mohawk Fine Papers located in Cohoes, New York which was the first paper mill to make coated paper with post-consumer waster fiber; the first to be certified by Green Seal; the first to support nonpolluting wind-generated electric power by purchasing Green-e certified Renewable Energy Certificates (RECs); and the first to move toward carbon-neutral manufacturing. Mohawk is the second largest industrial consumer of wind power in the United States, is an EPA Green Power Partner, and an EPA Climate Leader.
Monroe Litho based in Rochester, New York printed this book and has been in business since 1945. It was one of the first commercial printers in the United States to offset 100% of its energy usage with wind-generated power. In addition to winning many national quality awards, it holds several environmental certifications, including Forest Stewardship Council (FSC) and Sustainable Green Printing Partnership (SGP), and is an EPA Green Power Partner.