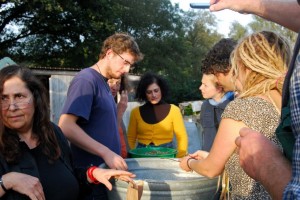 The following review was written by Janna Gehrke (you can find out more about Janna at the bottom of this post):

From the 23rd until the 25th of September the first Cultura21 Forum (by the German platform of Cultura21) took place in the “Studio Kunst und Landschaft” in Hude near Oldenburg in Germany. The forum was the opening for more events of its sort, which will occur on an annual rhythm in Germany. This year’s theme was: “The cultivation of ecology/-ies: Gardens and complexity in rural and urban landscapes”. It created an ideal platform for exchange between Cultura21 members, interested attendants from the vicinity and international guests. The aim of the event was to create networks, combine art and sustainability and get people interested in the theme of gardening.

A lively opening was guaranteed by Insa Winkler’s guided tour through the garden in the evening sun. Besides the white Garden and the classical English Garden, the participants were also able to see a mediterrenean garden and the ‘Wildparterre’, an area where wild herbs grow. All these garden treasures span over 7000m² and are accompanied by art objects. Among these the „Tamagotchis“ can be found, whom the artist Insa Winkler gave their names because they required a lot of care during an exhibition in Hamburg.

Further objects called Vegitabilibus are an eyecatcher, because they seem to grow directly out of the earth, without  a pedestal. Their genesis leads back to the artist’s involvement with Albertus Magnus, who said: The root is the mouth of the plant.

After this introduction, three referents gave some insights on the leading theme:

Gardens can be seen as approaches in order to reach the status of „cultures of sustainability“. They describe the search process for models of civilisation and dynamic balance. Following Edgar Morin, they yield the opportunity to think of unity and multiplicity together, rather than being mutually exclusive. Furthermore disorder can raise attention to the beauty of antagonisms. This creates an acute sensibility to the complexities in life.

According to Gilles Clément,  nature as constant transformation is what we should see in gardens. The following three concepts underlie his considerations:

In 2007 there were already more people living in cities than in rural areas. As a logical consequence emerging from this development gardens reclaim space in the cities and a (re-)discovery of the desire to garden becomes visible. This success of gardens is not a new phenomenon, but it gets more and more attention by the media. Thus it leads to a new understanding of urbanity since nature and city no longer exclude each other but build spaces in which natural and social environment can melt and create a new awareness concerning the value of time, consumption and community. This opens the opportunity of an integrative and community creating impact of gardening in cities.

The main reasons for the increasing popularity of urban gardens can be found in the desire to experience something that is perceptible to the senses, and in the wish for new forms of togetherness due to mounting individualisation, virtualization and marketization of the world.

Urban areas provide the basis for testing new social structures of sustainability and visualise alternatives in light of the imminent food crisis. Additionally it triggers off the political discussion, whether it might be possible to “plant” a new world.

De-composition and de-totalisation of certainties provide a constant transformation of the world and pave the way for a process of change. This process generates an area of tensions, which encompasses the maximal diversity of forms without destroying them. The opportunities can be enhanced in this way by gaining capacity for complexity.

The imperfection of mankind invites to open processes, as we have to connect to things that are outside of us. With reference to gardening, this implies a step out of everyday life, appropiated by various forces. Sustensive spaces are created for creativity, ancient knowledge, community and participation. Altogether they provide the basis for alternative lifestyles. Furthermore there is the possibility of making a connection between past and future, for instance by means of cultivating old sorts or rare species.

Examples of garden projects from Denmark emphasize this process: ‘Prags Have’ is an old factory site, which gradually changed and gained attractiveness induced by a process of gentrification. Meanwhile even the city of Copenhagen decided to support the project and enables citizens to grow their own vegetables there. A community kitchen was established as well as a meeting room in form of a caravan in the trees. ‘Amager Commons’ is an area in Copenhagen, which is partly used as an area for the development of the district Ørestaden of Copenhagen. Recently this vast fallow land was used for urban gardening projects, too. Thus a fight between landscape and urban development was inflamed. In most cases the garden projects are very vulnerable, as they rely heavily on support and investment.

On Saturday Shelley Sachs and Hildegard Kurt proceeded with a workshop, which took place in the framework of a mobile, alternative university, the “University of the Trees”. This network focusses on the question: What is knowledge and how do we know? It rests on the basis, that we are all students and teachers at the same time, but additionally the trees are also our teachers. Regarding this it is necessary to call forth the sleeping potential that is in everyone of us.

On a walk through the garden, the vicinity and the forest nearby, the participants were able to bethink of the trees and create a field of awareness by the use of bands. In the following group session the focus was put on the soil in the created awareness field. Within the group the participants were able to make a connection to the soil and foster the consciousness for this valuable resource. A very pleasant atmosphere for these processes of thinking was created by the use of the practice of active listening, which encouraged awareness-raising and reflection.

In the afternoon, the participants had time to take up questions that were partly already generated on Friday evening. These could be discussed and enlarged upon in Open Space sessions. The following themes were discussed: Gardens as experimental spaces for alternative lifestyles, Traveling/Walking – Why do we appreciate landscape as beautiful? and Privatisation of public spaces. It was possible to follow different discussions as the working method was shaped openly.

The second day was rounded off by a Guerilla Gardening Workshop lead by Rana Öztürk. The special background of Guerrilla Gardening is the idea of the beautification of public spaces such as fallow land in collective actions of planting. This can be interpreted as a political movement without being obvious or as an artistic intervention. It adds to identity creation and counteracts insufficiency and delapidation by restoring fallow land, and partly supports self supply.

After a first input about the history and emergence of the Guerilla Gardening movement, which developed as early as the 1970s as a form of political resistance, the participants got the chance to take action themselves. Seeds were sieved and mixed, so that the group could contribute its share to the beautification of the village afterwards. Hopefully first results can be seen in spring.

The evening faded away with the presentation of different garden and art projects together with a nice get-together around the fire. 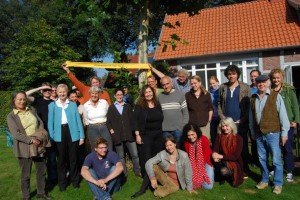 On Sunday Nikos Anastasopoulos presented his activist engagements in Greece, which include the throwing of seedballs to improve the character of the soil and to green part of the landscape in Greece again, following the principles of ‘Natural Farming’. In this way a hub for change shall be created in order to achieve a long-term success. The  locally rooted initiative runs the right path which can be seen in first successes thanks to the involvement of the participants.

Insa Winkler called attention to her project „Artenvielfaltroute“ in Wüsting, which aims to strengthen the local awareness for what is happening with biodiversity in the locality through cooperative work with the neighbourhood and the school nearby.

Finally Dr. Christa Müller gave an overview and a summary of the contents for the guests. Thanks to the hosts, sponsors and participants, the first Cultura21 forum was a great success.

This review was written by Janna Gehrke, who will be Cultura21’s intern in Germany for the next 6 months, starting in mid-October 2011. Janna’s internship is taking place within Leuphana University Lueneburg’s “Leuphana PLUS” program.