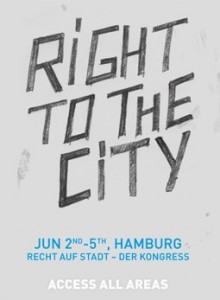 “The urban is defined as the place where people walk around, find themselves standing before and inside piles of objects, experience the intertwining of the threads of their activities until they become unrecognizable, entangle situations in such a way that they engender unexpected situations.” (Henri Lefèbvre: La révolution urbaine)

The Network Right To The City Hamburg invites to collective confusions, encounters and diversions at different places spread over the city. You can take part in workshops to the following topics:

The Congress is organized by Netzwerk Recht auf Stadt Hamburg and Bundeskoordination Internationalismus (BUKO) as well as many urban activists from other cities (e.g. Kairo, Caracas, Istanbul, Buenos Aires, New York as well as activists from China, South Africa and many more).